We’re back and very excited to announce our upcoming season.
A new season also means a chance for new members to join.

Want to know what it’s like to be part of our choir? Why not give it a try!
We will have open rehearsals throughout September on
Wednesday evenings.
We welcome people of all ages, countries and musical backgrounds.
No prior experience required. All you need is your voice and
a love for music.

Stay safe and hope to see you soon! 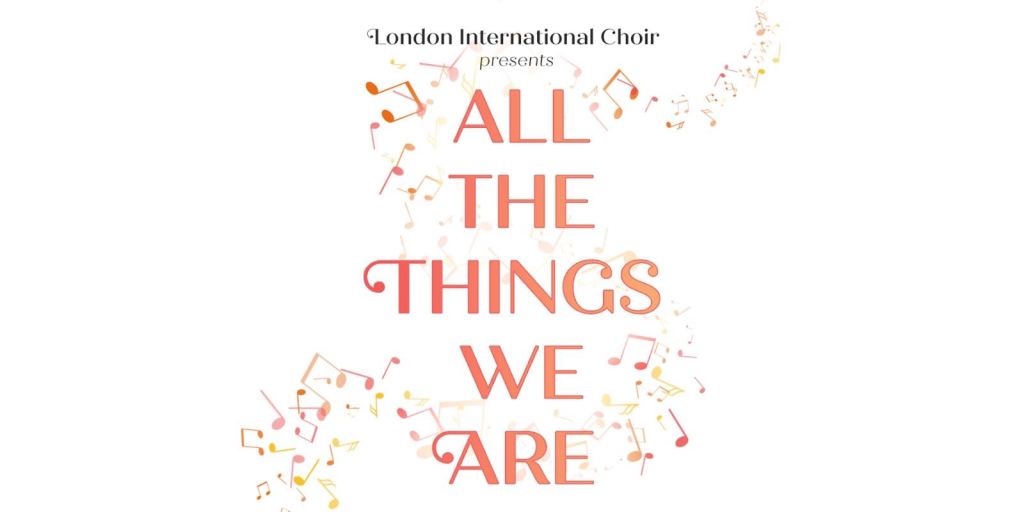 All The Things We Are- Gresham Centre- December 2019

London International Choir is 5 years old – a good reason to celebrate! Our showcase brought you the best of LIC: linguistic fun, crunchy chords, sky-high melodies, pumping bass-lines and cheesy key changes. From Classical to Bollywood, from Venezuela to the icy steppes of Russia, from the Middle Ages to the 21st Century, if it rocks, hums, raps, glides, elides or soars, we sing it.

Mix hot Cuban sauce with cool Russian salt, add a dash of Indian spice, beat in some Mozart, rap it in a rosy kiss, and you’re halfway to enjoying our summery musical cocktail, the Summer Breeze. It did, indeed, make people feel fine! 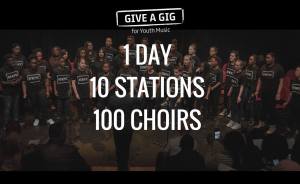 We were a part of Youth Music’s Give a Gig week, a fantastic fundraising initiative and a celebration of live music that strives to make a genuine difference in young people’s lives through music.

Last year’s winter concerts were rhapsodies of joy, celebration, reflection and sheer craziness – rhapsodies comprising music from A(rgentinian tango) to Z(ulu spirituals), taking in French jazz, American classical and Bollywood along the way. A musically Bohemian Christmas? You got it. 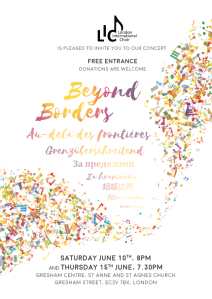 Summer concerts at Gresham Centre explored power of music to unite, and ultimately give meaning, by transcending boundaries across religion, race, and geography. 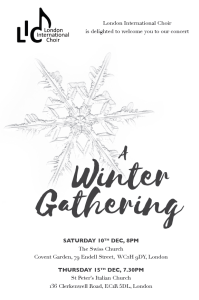 Winter concerts at Swiss Church and St Peter’s Italian Church explored a multitude of feelings and thoughts we have towards this cosmopolitan city of London and the festive time of year – the anticipation, reflections and celebrations.

Summer concerts at St Pancras Church took a speedy tour of some of our favourite sights in London – from Shakespeare’s Globe to Mayfair, from Elizabeth Tower to St. Paul’s Cathedral, taking the Tube, crossing the river a few times (or more), enduring a few typical London summer showers, and singing some of our favourite songs in the process. 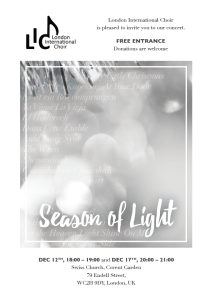 Winter concerts at Swiss Church celebrated traditions across months, continents, and languages from Halloween and All Saint’s Day to Thanksgiving, solstice celebrations, Saint Nicholas Day, Jewish festival of light all the way up to Christmas and New Year.

Our first winter concert. Listen to some concert highlights here.

A day of public outdoor performances at places such as Exmouth Market, St. Pancras Station, St. Paul’s Cathedral exterior and Swiss Church. Watch a sample of the tour here.

What people say about us

“Clear, positive vibe and energy from choir – everyone clearly looks to be enjoying themselves and supporting each other.”

“A great, social bunch of people who know how to sing – and have fun!”

“What an amazing Winter Rhapsody it was. Your choir is fantastic and it looks as though you have huge amounts of fun together … loved the naughty boys in the back row … the whole evening was filled with joy and – dare I say it – love and it has completely made my Christmas.”